Dark Angeles. Not merely a play on words, but a statement on what lies beneath the sunshine and sheen of the California dream. Art of Shock are a band with the sheer will and determination to make it even amidst that backdrop of broken dreams. “There’s a desperate heartbeat that comes with life in Los Angeles,” says Art of Shock guitarist and frontman, Art Geezar. “People come here with big dreams and very little else. It makes them do shitty things just to get by. It’s a desperate place.” 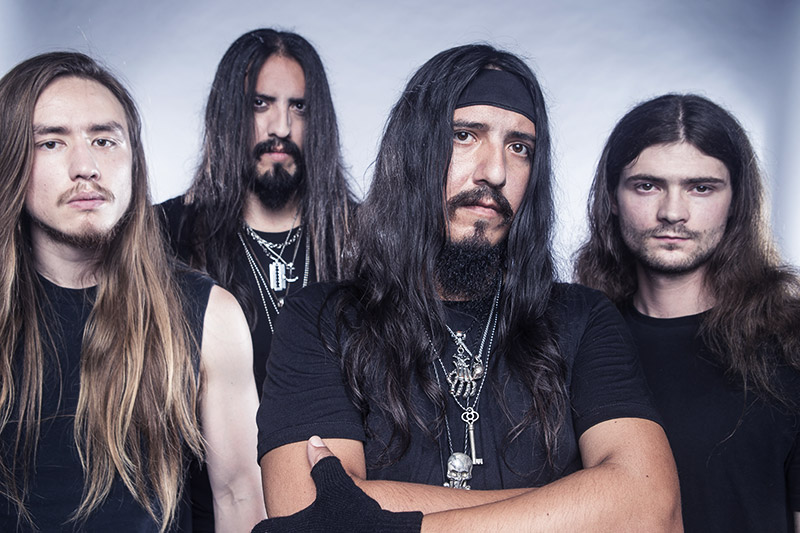 Art of Shock’s Century Media debut, Dark Angeles, churns with that intensity of the city of (fallen) angels. AOS’ hard-luck and hard-won story begins in Mexico City, where Brothers Art and drummer Adrian Geezar grew up; inspired by classic thrash and metal bands became the fuel for their earliest musical endeavors. Moving to Los Angeles only served to push the nascent Art of Shock. “I booked a show [at the Whiskey A-Go-Go] without having a full band!” Adrian recounts. Making a few friends and pulling together a scrappy line-up, Art of Shock began to make a dent playing in Hollywood. “It’s one of the three places you know to go to, to play music,” says Adrian. “Plus, it was closer and cheaper than New York and London!” Being perennial outsiders, the brothers didn’t give a shit about playing the “cool” spots in town. They made friends and played to whomever would have ‘em. “It felt like we were the house band at The Whiskey for a time,” says Arturo. “We didn’t know or care where we played – as long as there was a stage there.” As members drifted in and out of the band, Art of Shock found their sound – growing harder and faster, and faster.

The Geezars sheer determination, early in the band’s career, earned Art of Shock a spot on the 2013 Vans Warped Tour. Firing off a blind email to Warped founder Kevin Lyman won them a slot on the tour’s Ernie Ball stage in exchange for manning the grill at each post-show Warped barbecue. “It was the best way for us not to lose money!” laughs Adrian. We didn’t realize we were going to be feeding hundreds of people each night. It was hard but it was worth it. We were the weirdos of the tour. We were this metal band playing in front of kids who were there for pop punk and screamo – but somehow we ended up selling 3000 CD’s!”

The hard work paid off – slowly. Shows around Southern California, opening for the likes of Trivium and Cavalera Conspiracy (“We really related to their story as brothers growing up,” says Art) garnered Art of Shock fans and a reputation as one of L.A.’s top metal bands, standing apart from the hordes of backyard thrashers and Echo Park hipsters. “We started on the Sunset Strip and aren’t ashamed of that,” says Art. In fact, it was at a show at The Roxy opening for Sacred Reich and Hirax that Art of Shock (now rounded out by lead guitarist Nick Ertel and bassist Brice Snyder) caught the attention of Century Media Records, who signed the band shortly afterwards. “Century Media was a name we had grown up with as kids,” says Adrian. “Our ‘Inner Kid’ was super-super stoked when the possibility of working with the label came about!”

Enter nearly a year of painstaking writing and rewriting as Art of Shock rose to the challenge of their new label home. Songs were written, honed, rewritten and tossed by the wayside as the band worked away in a cramped, North Hollywood rehearsal space. They walked out a stronger, more focused unit: ready to travel to Nashville to work with producer and mixer, Mark Lewis, who had already distinguished himself with his work with the likes of Megadeth, Cannibal Corpse and The Black Dahlia Murder. “Mark really pushed us to the limits,” states Arturo. “He really know what he was doing in terms of getting the best performances out of us.” “We wanted to make a record that wasn’t just another thrash record,” adds “Adrian. “We have a lot more aspects to our sound, growing up on rock, punk and metal and we wanted all of that to come out in the record and sound modern at the same time. Mark really helped us deliver that.”

From the roaring-out-of-the-gate riff to opening track, “Cast a Shadow”, it’s apparent that Art of Shock’s first full-length album is a more amped-up proposition than any old friends or fans could have possibly expected. With drums and guitars pushing each song into “the red”, Dark Angeles careens with the sort of energy that backs up You can hear it Art’s riffs, Adrian’s just-on-the-verge drumming and Nick’s fluid guitar work. Art of Shock’s hard work and determination. “Execution Song” flips the switch into mid-tempo riff-ride before the title track picks things up into scalding sonic territory. Through it all, the band never sacrifices melody or musical chops as Art’s slightly accented snarl gives way to passionate, singalong choruses ala classic Megadeth fueled on the intensity of early Sepultura. Top it off with a bombastic cover of Iggy Pop’s anthemic (and in AOS’ case, all-too-appropriate) cover “Lust for Life” and Dark Angeles is every bit the classic debut that the Geezar brothers fought and scraped their way through the “jungle” that everybody from Guns N Roses to the streetpunks on Hollywood Boulevard have welcomed us to and warned us about. “Even the people we see who have come here and made it are still a little bitter and cynical about this place,” says Art. “It’s a tough city but in our time living here we’ve learned that you can’t give into that – you’ve got to take every challenge to the limit!”

“The process of making this album really solidified the band,” adds Art. “We became a gang - we actually all live together in the same house now!” Art of Shock’s story is every bit the classic tale of a band arriving in Los Angeles, taking on every challenge in front of them with integrity and a genuine “fuck-all” attitude. They’re not about to give up any time soon.

For more information on Art Of Shock, please contact: